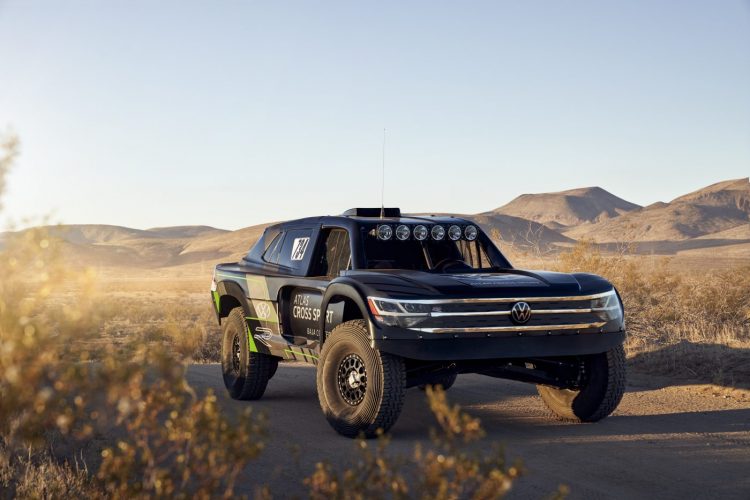 Volkswagen has unveiled a new off-road racing project which brings together two of US rallycross’ biggest stars.

Other than that, Volkswagen is remaining tight-lipped about the project, which is a nod to the classic Beetle-based dune buggies of old. What we do know is that it will compete in the Class 7 Open Production Unlimited class of the gruelling Baja 1000 off-road race in November of next year with Foust among its drivers.

“I know what this combination of engine and drivetrain is capable of,” said Foust, who has been aligned with Volkswagen since 2014. “I’m really excited to see this bit of Beetle DNA live on in the Atlas Cross Sport R and am itching to get behind the wheel.”

The vehicle previewed at the Los Angeles auto show this week is a concept, but the Atlas Cross Sport R is already undergoing a testing and development programme ahead of its race debut.

The decision to compete in the Baja 1000 is something of a departure from Volkwagen’s commitment to environmental concerns and electric racing, but the German manufacturer has teamed up with The Conservation Fund to plant 1000 trees – one for every mile of the race –ensuring that the entire project remains carbon neutral.

Volkwagen is set to announce further details of the project in 2020. It will also invite designers from schools and colleges across the US to design the truck’s final race livery.

For Foust, his involvement in the project is the first announcement of a racing programme for the veteran driver. His continued participation in rallycross is currently up the the air after Volkswagen’s full withdrawal from the discipline in the US, which was soon followed by the announcement that ARX would not be continuing beyond this season.